Our corporate documentary is here!

Coming to you for the first time, the premier of our short form corporate documentary. A version of this will run on public television this year, while a shorter segment will air during Fox Business News during the month of June. Let us know if you see it!

2019 and the Rise of Technology-Enabled Nationalism

By Meredith Wilson | Uncategorized | No Comments
4

Candid Thoughts on US Leadership in the World

There’s an elephant in the room. And its past time to let it out.

Those of you who’ve met ERI’s leadership and analyst cadre probably recognized right away that we, like most intelligence professionals, are rather opinionated individuals, and as individuals, we’re rather comfortable speaking our minds in private settings. Divergent in opinion as we often are (which we see as a strength of our business and analysis), we take exceptional pride in training our analysts – and other companies’ analysts – to work diligently to ensure that analysis is anything but opinion. There is, after all, a sharp division between editorial and analysis – something that is not always immediately understood by those new to the field. Our product is intelligence analysis. By definition, analysis is as objective as humanly possible. It should consider only facts, trends and potential outcomes. It does not serve a specific agenda, other than to support business and executive decision-making with the best and most relevant information possible. In hope that its consideration leads to decisions that produce the most effective outcomes possible. That is the role of proper analysis. These premises underpin our tradecraft.

That’s a long-winded way of saying that we find it challenging to suggest that we, as intelligence analysts, need to explore head-on whether the ship that is the world’s superpower has lost its leadership heading. And if so, what have been the impacts and how might we predict future outcomes. (Elephant exits the room.) Its past time to look at this situation objectively, accounting for bias (yes, we are ALL biased) and approaching our tradecraft as the expert analysts we are. As for what follows, agree or disagree. Or ask more questions. This is not intended as political commentary, but it is also not analysis. Rather, its thought. Or better yet, a challenge to all of us to think beyond our politics – whatever they are. To explore whether bias is creeping into our own work when we set to with our cup of coffee and keyboard each morning. How would we treat this situation as a US company? Would we/ or do we treat it differently as an organization outside the US?

Since taking office, the administration has engineered a marked shift in US leadership. A move away from accepted norms and redlines of political power, changes in perceptions and dealings with US allied and non-allied countries has brought us to a new and very different foreign policy than the US has followed under previous leaders. And not all of it has been a negative change, in fact there is an argument to be made that some of these changes were badly needed to break stalemates over old issues. But, the president of the world’s current superpower has also been accused of opening himself up to the prospect of blackmail by adversarial foreign powers, spoken derisively of perceived political challengers on both sides of the aisle, engaged in name-calling with foreign leaders and alternatively praised authoritarian rulers while speaking, at times wistfully, of the authoritarian controls they enjoy. Where diplomacy and backroom discussions between the US and world leaders previously led to restraint from human rights abuses – or at least significantly lower profile abuses – these discussions, or perhaps lack of those discussions and diplomacy, now seems to have led us to a place of emboldened dictatorial behavior. Does this lie in the more transactional approach of current US leadership? Where previously US foreign policy and aid money was attached to more conditionals and more diplomacy, today it appears less interventionist and attached to only a few, inconsistent ideologies.

Over the course of its post- World War II reign as one of the world’s two superpowers – and as the only superpower in the post-Soviet world order since the 1990’s, embracingly or reluctantly or both, the US was often been viewed as the world’s police force and center of gravity for good governance. Successfully and unsuccessfully, the nation has been a key provider of aid, it has (yes, selectively) contained dictators, spoken out against human rights abuses and borne an overly proportional role in defense alliances such as NATO. Its domestic market has buoyed the global economy and its role in advent of the internet has connected industries, academia and people from major population centers to far flung rural corners of developing nations, bringing to bear today’s new, data-driven industrial revolution. As a result, foreign leaders have often been forced to consider consequences of their actions, whether against their own population or their neighbors. The US could not be everywhere at once, nor did every malicious action interfere directly with US interests. But consequences it could impose were at least a consideration, thanks to US interventionist policy that projected hard and soft power far beyond US borders.

Today, how serious are these considerations by foreign leaders? Are they still a serious concern that impose a deterrent effect? And perhaps, even if we disregard a direct effect, how do these events – seemingly ordered by governments that are often our business and government partners in various endeavors – impact our investments? Our ability to continue to work in these countries, with these government partners? Will this new world order endanger our personnel by giving them less protection from corrupt governments and security forces?

Let’s simply take a look at some of the facts.

Are these actions the result of foreign leaders’ perception of changed US leadership? Or would they have happened anyway? If they are, how does this change our assessment or prediction of future foreign leadership decisions and resulting risks to our organizations? While there was a time organizations may have said “that has nothing to do with us,” most companies can say that no more. Importantly, most don’t want to. If the Khashoggi case illuminated anything for the business world – it was the tangible political and financial risk associated with gross human rights violations – even when those organizations have no direct involvement and would never sanction such actions.

So, is the world today really experiencing more of an “each to their own” climate than it has in recent history? And how much of that is down to changes in US leadership? Historian Robert Kagan calls this the international “jungle.” The world before the “liberal world order” – pre-World War II. A world where leadership based on good governance is absent and strongmen prevail. If the US no longer wants to take on that leadership role, who takes it up? Or do we return to the era of every nation for themselves? And if so, how does that change the boundaries of countries behavior and its impact on our people and organizations?

As we have previously posited, when writing on domestic politics, it is sometimes useful to distance oneself from the most polarizing aspects of the issue – in this case, that often means speaking less directly about polarizing personalities – whose mention can distract us from the information and analysis we need to provide to decision makers. But in this new international order – with US decision-making less predictable and in some cases more immediately impactful on other global leaders decisions its important to ask what we may be leaving out of our analysis – and to chance – if we are tiptoeing around the topic or ignoring it altogether. If it wasn’t our country, would we leave it out of our analysis as a major data point? How do we approach it with as little bias as possible? How do we look objectively at an administration that virtually no one on the planet is ambivalent about?

It’s a tough nut to crack, and we suggest doing it with structured thinking, analytic tools that can help you understand your own bias and with counterparts with perspectives that differ markedly from your own. But to leave these questions unanswered is to create a serious blind spot for the future of our organization and the world.

Meredith Wilson and Brady Roberts are the CEO and COO of Emergent Risk International, respectively.

Join us for a free concise writing seminar for corporate intelligence professionals.

This seminar will focus on assisting intelligence professionals of all levels of expertise in honing and sharpening their business writing skills. We will work through several interactive exercises, discuss editing tips, tone, word choice and ways to write on politically polarizing and sensitive topics. 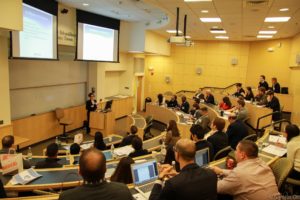 Both trainings will be followed by an informal Happy Hour at a location TBD from 4:30 – 6:30.

To register, please send the name, title and email of the desired participant via the Contact Us link on this website. We have a limited number of seats, so please send your registration right away. Participation is limited to corporate, government and NGO intelligence professionals.

Emergent Risk International is hiring interns! ERI is a Dallas based risk and intelligence advisory firm. Our business is assisting companies in utilizing intelligence and analysis to better drive their business. We focus on three primary activities:

Intelligence Analysis Interns will be responsible for helping ERI with a range of research, technology, analytic and administrative tasks to better serve its clients. Interns will contribute to research projects, products and services and will have a role in developing new products for the company.

Remuneration: This role will be unpaid and run from the beginning of October through December (candidates interested in continuing through the spring semester will also be considered). Interns will receive intelligence analysis training, start-up experience and exposure to other critical professional skill sets. This internship can also be taken on for course credit with the permission of a candidates’ institution. Successful candidates will work out of our offices in downtown Dallas 15-20 hours per week. Some exceptional candidates may be considered for remote work.

Experience: The right candidate will possess most or all of the following qualifications:

Sign up for our newsletter to receive our monthly intelligence briefing, infographics, and updates on the latest events. (And we promise we don’t do spam).